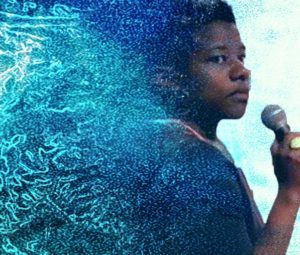 Ocean Filibuster puts audiences in the middle of a human/ocean showdown. A single performer – Jennifer Kidwell – plays both Mr. Majority, leader of a future global senate, proposing a bill to end the ocean as we know it; and O, the ocean, who rushes the senate to defend itself. O’s filibuster includes songs, spells, stand-up, and giant video projections of its inner life. With a pop-techno score by Sxip Shirey and video landscapes by Tal Yarden, Ocean Filibuster implores that humans accept that they ARE the ocean, before it is too late. Commissioned and developed by the American Repertory Theatre, with support from the Harvard University Center for the Environment.