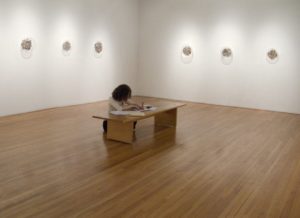 Amanda Cooper is a freelance arts manager, consultant and advocate, working with a wide variety of theater and music companies around New York City. Recent and current companies she works (or has worked) with include: A.R.T./New York, DNAWORKS, En Garde Arts, The New Ohio, The Prototype Festival, Concrete Temple Theatre, Sinking Ship, and Music Before 1800; NYSCA, Stein | Holum Projects, Cliplight Theater and winter miller’s community theater. From 2011-2015 she was the General Manager for HERE, a multi-disciplinary arts space in Manhattan. Prior to HERE, she held positions at The House Foundation, Symphony Space, Theatre Development Fund, Voice & Vision Theater and the Look + Listen Festival, where she has been serving as the President since 2014. Amanda is a published theater writer and has served as an auditor and grant panelist for New York State and New York City. She is a graduate of NYU’s Gallatin program and a trained mediator through New York Peace Institute. She loves flora and fauna, and the city.